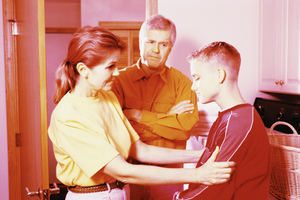 Diego and His Parents Learn to Deal

Recently, however, things began to change. Diego began to seek some more independence. Instead of letting that happen, though, Diego believed his parents were becoming more controlling.

Diego's parents didn't believe they were becoming more controlling. They believed Diego was trying to grow up too quickly and he needed protection from the outside world.

What was the result of this? There was a lot of fighting in Diego's world. Diego and his parents fought over social activities. They fought about bedtime. They fought over what movies to watch, what clothes to wear, and what food to eat.

One weekend Diego's sister, Mary, came home for a visit from college. She observed a lot. During a fight about an R-rated movie, Mary decided to intervene.

"What's going on here?" Mary asked. "You are yelling at each other. Whatever happened to respectful communication? That was always rule #1 in this house."

"That's not true," Dad said. "You are changing and not respecting our rules anymore."

"Well, you keep yelling at me and you don't realize I'm growing up," Diego replied.

"As an onlooker," Mary said, "I think you are both a little right. First of all, Diego, the R movie is a rule set by the movie theater as well as our parents. You need to respect that. Second of all, Mom and Dad, Diego is growing up. I heard you tell him he could only go to a 6 o'clock show. Perhaps it's time you let him attend a later showing like an 8 o'clock. You know, compromise."

"Remember," Mary continued. "This is Diego's time to become his own individual. You've guided him well, Mom and Dad. He'll be just fine. He'll still need your guidance and protection, just a little looser."