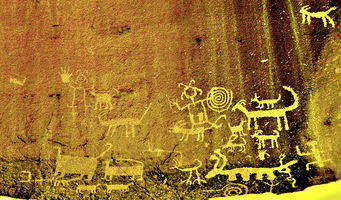 The MTP jolted to a stop. I was really groggy. The farther you leap through time, the more jumbled your brain cells get. That tends to make your stomach edgy as well. I felt like my lunch was about to head for the hills.

This trip was the farthest back we'd ever tried to go. If things had worked right, we were now somewhere around 1100 A.D. We hoped to meet some people living at that time in the southwestern U.S. No one knows their real name. The Navajo had called them "Anasazi." The name meant "ancient enemy."

These early people are a mystery. No one in the rest of the world had a clue they'd existed until 1849. That's when the first white men saw the remains of their cities. The dwellings were found in Chaco Canyon, New Mexico. By that time, the ruins were 700 years old.

Still, the buildings were marvels. One of them was five stories tall. Inside were hundreds of rooms. Who could have built these wonders? When the white men came through, there were tribes of native people in the area. The Hopi and Zuni were pueblo dwellers. Their structures were humble compared to the ancient cities.

The Aztecs of Mexico were an advanced people. Could they have wandered this far north? It turned out that the strange city had been built before the Aztec culture arose. The buildings remained a riddle. Some thought the site was proof that the Romans had visited the New World.

Later, other sites were found. One was perched on the cliffs of Mesa Verde, Colorado. From this site, experts uncovered a few more clues about the people who had built the cities. But the questions just grew more puzzling. Who were these intriguing people? Where had they gone?

We now know that the Anasazi were several different groups. They started out as wanderers. Hundreds of years before we even started counting years, these nomads roamed the deserts of the U.S. They hunted for their food. They made baskets to store seeds and other food they gathered.