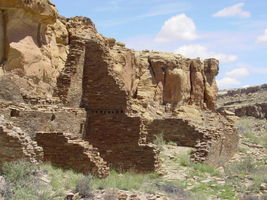 "Blech," someone croaked behind me. Rusty tried to stand up, holding his middle with both hands. His face was pale beneath his rust-toned flat top. "I don't feel so good."

He staggered to the control panel of the MTP. He stared bleary-eyed at the dials and buttons. Then he started fiddling with stuff. Usually, we didn't have to adjust the capsule controls when we were on a trip. "What're you doing?" I asked.

"Something didn't sound right when we landed," he said. "I'm checking some things." So Rusty had heard the sound, too. It hadn't been just my brain flipping out.

"Rusty can fix it," I told myself. Rusty is our tech guy. He's about one tenth mechanic and nine tenths techno geek. If it's got dials and switches, Rusty's got its number. I was glad he was on the job.

As my stomach settled, I stepped to the door of the capsule. I listened and then slowly opened it a crack. Bright sunlight hit me in the eye. I couldn't see anything. It seemed quiet, though. No rampaging buffalo or sword-wielding pirates. That wasn't always the case. You never could be sure where you would land.

I put on my shades and stepped out the door. After a moment, I began to make out shapes. We seemed to have settled in a flat, rocky spot. It was wide open country-just some scraggly bushes here and there. Not a tree in sight.

Just in front of us the earth dropped off like you'd cut it with a knife. We'd landed near the edge of some rock cliffs. Below us, a wide canyon went on and on in the distance. I knew from our study that it was Chaco Canyon. Behind me, the others stepped out of the MTP. "Look!" Prunella said. "Someone's out there!"

She pointed directly in front of us. In the glare of the sun, we could make out very little. Then I saw a slight motion. There, on the edge of the cliffs, a figure stood. It made a dark outline in the blinding sun. Then it turned and vanished off the edge of the cliff.