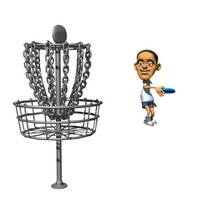 Colorful leaves fluttered in the crisp, cool air. It was cooler up in the mountains than it was in the foothills where Matt lived. He got out of his pickup truck and stretched his long legs while reaching his arms up to the sky. He yawned. He had gotten up early today to participate in the Ace Race. He had driven two hours to compete against other players for a trophy and bag of disc golf discs.

Matthew had been playing disc golf for about a year. It is a sport in which players throw flying discs toward metal baskets. It is scored in a similar way to golf. A tournament is a little different from a regular game. Players get only one throw per basket. They earn points based on whether they make the basket or hit it.

One of the main reasons Matt had wanted to play in this tournament, though, was the player package. When registering, each player receives two discs and a baseball cap. The cap normally sells for about $18. When Matt saw that he could play in the tournament for $25, he figured that he would get his money's worth out of the fee.