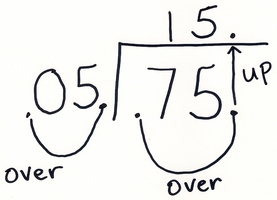 Dividing By a Decimal Number: Over, Over, and Up!

"Class, in our math lesson today I will need your help," said Mrs. Brown. "We've been learning how to do some long division, and you have done very well. Today we will learn a new division trick. When I move my hand like this, I need for you to say, "Over." Mrs. Brown moved her hand from left to right as though she were making a U. "Let's practice that, shall we?" She moved her hand from left to right, making a U in the air.

Her students said, "Over!"

She put her thumb up with her fingers closed in a fist. The students said, "Up!"

Joe asked, "But why do we need to do that for a math lesson?"

"I'll show you, Joe. We're going to divide a big number by a decimal number. When we divide, we want the

"Suppose I have $1.00, and I want to give a quarter to as many students as possible," said Mrs. Brown. "I wonder how many students would get a quarter."

Chris raised her hand. "Thank you, Chris, for remembering to raise your hand! I appreciate that," said Mrs. Brown. "How many students would get a quarter, Chris?"

"That's correct!" said Mrs. Brown. "Let's see what the problem looks like written on the board."

She wrote $1.00 on the board. She drew the division "house" around the number. Then she wrote .25 in the divisor's place. Then she turned to the class with a smile. She moved her hand in the air to make a U shape. The class said, "Over!"