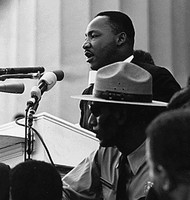 Dr. King, a Speaker for Nonviolence

Fifty years ago, people were not treated the same in our country, especially in the southern states. Many blacks were not allowed to vote. White people and black people did not sit together in buses or trains. Black and white children did not go to the same schools. Blacks and whites did not even drink from the same water fountains. They were not allowed to. Laws said blacks could not go to the same places and do the same things as whites. That is called segregation.

Many people did not think that segregation was fair. They wanted to change things. Martin Luther King, Jr., was one of those people who wanted change. He wanted everyone to have the same civil rights. Civil rights are the basic rights, like the right to vote, that all citizens are supposed to have. He did not think that people should be treated better or worse because of the color of their skin.