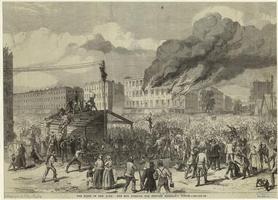 As the Civil War went on, more men were needed to fight for the Union army. It became harder and harder to find enough men. Army life was hard. There were many people who didn't want to leave their jobs, homes, and families behind to fight.

In 1863, Congress passed a draft law. All males between twenty and thirty-five and unmarried men age thirty-five to forty-five could be part of the draft. Because they were not citizens, blacks were not eligible for the draft.

The first day of the draft in New York City was fine. The second day, Monday, July 13, 1863, didn't go as well. People in the city were very angry about this draft. They were against a part of the draft that said a man could hire a substitute or pay three hundred dollars to get out of service. This was nearly a year's worth of wages for a typical worker. Immigrants and the poor could not afford to hire someone or pay money not to have to fight in the war. Rich men had no problem with this and paid the money easily. Many felt that it was a war being run by rich men, but the poor men were actually doing the fighting.