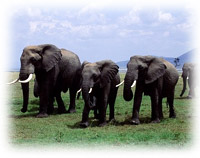 You've seen elephants at zoos and in circuses. They are huge animals with a complicated social life. What happens to them when they get old or the circus or zoo can no longer afford to look after them? Some are sold to other zoos or circuses. Some find a haven in an animal sanctuary.

What is an elephant sanctuary? It's a safe place where elephants can go to live out their lives in peace. They no longer have to perform to earn their keep but get to just be elephants.

There are two kinds of elephants in the world, the Indian or Asian elephant and the African elephant. The Indian elephant has had a working relationship with people for thousands of years. They have worked moving lumber and heavy loads and carried men on hunts for other animals. As the human population grew, elephants began running out of food and their habitats were gradually destroyed. Asian elephants are now endangered.

In Africa the hunting of large bull elephants was popular for a time. Men liked to boast that they had killed these huge animals. Sometimes they had the head mounted to display on the wall, but often they took only the tusks, leaving the body to rot in the hot African sun. Even today, poachers hunt elephants illegally for their ivory.

Elephant herds in some parts of Africa are threatened because of development, while in others, the herds are too large and must be culled so the animals do not overgraze their territory and starve to death. Some of these culled animals, especially the very young ones, are sent to other countries like America to zoos or circuses.

A social life is very important to elephants. They have family group relationships just as people do. The older relatives help to teach and raise the young ones. Solitary elephants are usually quite lonely and sometimes experience psychological problems as a result. This is when an elephant sanctuary can help. They have the experience to deal with the animals and help get them to become part of a small herd. There the animal can re-establish ties with its own kind in controlled conditions.

There are at least two elephant sanctuaries in America. One is the Elephant Sanctuary in Hohenwald, Tennessee. The other is Riddle's Elephant and Wildlife Sanctuary in Arkansas. Both of these organizations have educational opportunities for learning about elephants. The Tennessee group offers school children the opportunity to come and see the elephants and learn more about them and how the animals came to the sanctuary. The Arkansas sanctuary offers two-week classes for people to come and learn how to take care of elephants, and they have students attending from all over the world.

The sanctuary elephants are not left to go wild. They still work with their keepers on a daily basis. They are washed, have their feet checked, and get any veterinary care they need. They are kept in small herds to enjoy each other's company.