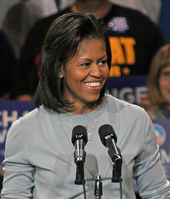 Barack Obama became President of the United States on January 20, 2009. Michelle Obama added the role of First Lady to her many other titles at the same time. She is a mother and wife. She is a daughter. She is a lawyer. She is a public servant. She has dedicated her life to making communities the best they can be.

Michelle Obama was born on January 17, 1964. She was born in Chicago, Illinois. Mrs. Obama's parents were hard workers. They taught her and her brother the importance of hard work and achievement. They taught them that they could be successful. They were Mrs. Obama's first role models.

Mrs. Obama graduated from Princeton University with honors. She earned a law degree from Harvard Law School. Then she went to work for a law firm in Chicago. This is where she met her husband. Mrs. Obama decided to make a change in her career a few years later. She left the law firm. She followed her passion. She worked hard to help others. She encouraged people to serve their communities.