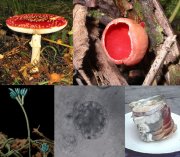 They're all around you. Open a door, and thousands of them float inside. They are too small for you to see. They are looking for food. Some land on a piece of bread, an orange, or an open jar of jam. Others land on damp clothes, a shower curtain, or sweaty socks. They leave fuzz behind wherever they have been eating. The fuzz can be blue, white, green, black, or pink.

Outside, millions of them feed on trees and flowers. Others feed on insects and other animals. Some eat wooden things like porches, fences, decks, and steps. They feed on these things until the objects fall apart. Others help plants and trees grow. They provide food for thousands of creatures. Many of them are nature's recyclers. Who are they? They are fungi (one is a fungus).

For hundreds of years, people thought that fungi were plants. Now they are classified into a separate group all by themselves. There are three main things that make fungi different from plants.

First, plants have roots, leaves, and flowers. Plants can use their leaves to make their own food from the sun's energy. Fungi have no leaves, flowers, or roots like plants do. They can't make their own food. Fungi feed on living or dead matter around them.

Second, plants are made of a material called cellulose. Fungi are made of chitin (KAHY-tin). Chitin is a tough material that is found in the outer skeletons of insects. Chitin is not found in plants.

Third, most plants reproduce, or make more of themselves, by making seeds in their flowers. Fungi reproduce in other ways.

Most fungi begin their lives as spores. Spores are tiny. When they land on something wet, they begin growing. The spore begins to grow a long thin tube called a hypha (HAHY-fuh; the plural is hyphae). The hyphae (HAHY-fee) ooze powerful chemicals called enzymes. The enzymes slowly digest the food for the fungi. Unlike animals, fungi digest their food outside of their bodies. Then they absorb through the hyphae the nutrients that are released.