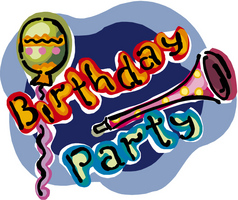 Going to a Party

Cindy got the mail out of her mailbox. She looked through it. There was something addressed to her. She was excited. Cindy opened the small envelope. It was a card. On the front it said, "Come to a Party!" "It's an invitation," Cindy thought. She wondered who was giving a party.

The inside of the invitation gave most of the information Cindy needed. It was going to be a birthday party for her friend Sue. The party was on July 10 at 1 P.M. Cindy looked at her calendar. She would be able to go! She quickly wrote down the time and the place of the party on her calendar. That way she wouldn't forget about going.

The invitation said to "R.S.V.P." Cindy knew that meant she should call to say if she was coming to the party or not. She dialed the number. Sue's mom answered. "I just called to say I will be able to come to Sue's party," Cindy said. "Thank you for inviting me."

"You're welcome," Sue's mom said. "We'll see you there. Don't forget to bring your rollerblades. We're going to go skating."

"I saw that on the invitation," Cindy said. "That will be fun! I'll be sure to bring my skates."