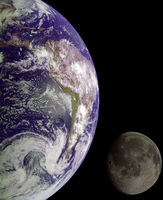 Caption: Gravity keeps the moon in orbit around Earth.

How does gravity work? People have wondered about that for a long time. And, even today, we don't know the full answer, but we do know a lot of interesting facts about gravity thanks to scientists like Sir Isaac Newton and Albert Einstein.

It is said that Isaac Newton discovered gravity in the 1600s when he was sitting under an apple tree. An apple fell on his head, and he got to thinking. Whether or not that story is true, Isaac Newton gave us our definition of gravity and an equation for measuring its force.

According to Newton, gravity is a force that attracts all objects to one another. So not only does the earth have gravity but so do the other planets and the stars. Smaller objects and people have gravity, too, but the force of their gravity is so small that it is not noticeable.