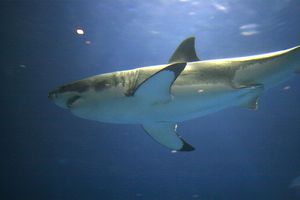 Great white sharks do not have much to fear. Instead, they are one of the ocean's greatest predators. They have more than three thousand sharp teeth in their mouths. They eat seals, sea lions, fish, sea turtles, and even whales. Humans are not a normal part of their diet. Great white sharks sometimes do attack humans swimming in the water. The sharks do not usually kill, though. Scientists think that the sharks bite people because they are curious, not because they are hungry.