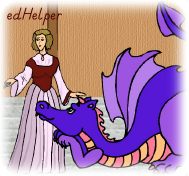 "Get out of here, you pernicious monster!" shouted Montrose as he advanced toward the dragon with an upraised broom.

"Stop it!" cried Mara as she tried to twist the broom from her husband's hands. "Warbret's not a monster. He's just a young dragon. I'm sure he didn't mean to be destructive. He's a gentle creature, which you would see if you gave him half a chance."

Mara slowly put the broom on the stone pavers and spoke to the dragon in soothing tones. Warbret's agitated open wings and raised crest ridge soon relaxed. Mara scratched his head behind his ears and under his jaw. He warbled in his throat with pleasure at her touch.

"There's nothing malicious about you, is there?" she said to the animal. He playfully butted her with a head that was many times the size of her own. "Go and hunt for your supper, but be sure to stay away from the sheep in the upper pasture. Montrose would never forgive you if you were to take one of those."