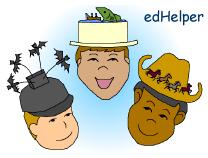 The strong odor of paint and glue permeated the room as Matt put the final touches on his special hat. Mrs. Longridge had told her class that prizes would be offered for the best entries. Matt intended to win the prize for the best one of all. He had come close to winning last year, but he knew this year's idea was even better. He only hoped his teacher thought his idea was as funny as he did.

Matt had laughed over it. It featured two small figures fishing from a row boat. Coming up out of the "water" around the boat were the head and jaws of a huge fish, getting ready to swallow the boat.

He had made the small boat out of cardboard, and two small action figures sat inside. They were really from his space invaders set, but they could try their hands at fishing for one day, he thought. The fish was the hardest thing of all. It was made of papier-mâché, and Mom had helped him paint it just right.

Using the hot glue gun, he carefully placed the blue fabric into folds, like waves, and fixed them in place. (They covered the places where the fish was attached to the hat.) Matt grinned when he tried it on and glanced in the mirror. It looked pretty good.