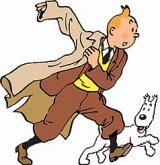 Hergé and The Adventures of Tintin

Reading Comprehension for May 23

Have you ever read a comic series called The Adventures of Tintin? The entire set has 24 stories. Each features a daring trip of a young reporter named Tintin. When Tintin was on the road, his best friend, a foxhound named Snowy, was always by his side. Sometimes it was just the two of them trotting the globe. Sometimes they went with their friends, Captain Haddock, Professor Calculus, or the clumsy twin detectives, Thomson and Thompson.

Tintin, Snowy, and their sidekicks are fictional. But thanks to their creator, Hergé, they look quite real.

Born in May 1907, Hergé was a famous comic writer and artist from Belgium. From very early on, he knew that he liked to draw pictures. When he was 17 years old, he created a pen name for himself. Since then, he always signed his work not with his real name (Gerges Remi), but with this new identity - Hergé.