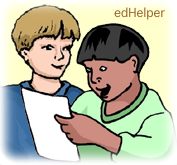 Brian grabbed the letter and ran out the door. He couldn't wait to get to Steven's house to show him the latest news he'd received from his older brother, Jeff. Jeff was a marine in the 2nd Battalion, 24th Marines, from Chicago. This latest letter was amazing! Just wait until Steven hears this, thought Brian as he pedaled his bike the three blocks to his friend's house. Coasting into Steven's driveway, Brian's mind wandered back to the teary good-bye at the airport. That was almost three months ago. He hated to see his mom crying like that. Even his dad had to wipe away tears. It was just so hard to say good-bye when you weren't sure when you'd see each other again.

"Is Steven around?" Brian asked.

"I think he's upstairs in his room."

Brian took the steps two at a time. He could hear the stereo blaring from Steven's older sister's room as he rushed down the hallway. Steven's door was open, and Brian could see his friend lying crossways on his bed, looking through an open magazine.

"Hey, Steven, I just got another letter from Jeff. Sounds like he's doing some awesome stuff!"

"What are you talking about?" Steven tossed the magazine on the floor and sat up.

"Jeff says he's at this TV and movie studio in San Diego. That's where he's doing the latest ops."