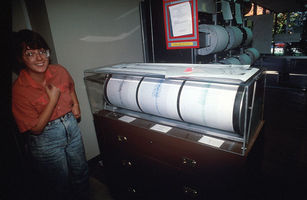 How Does a Seismograph Work?

Caption: Seismographs at the U.S. Geological Survey record the north-south horizontal, east-west horizontal, and vertical components of the earthquake that took place in California on October 17, 1989.

A seismograph has a pen that is hanging in the air. The pen touches a roll of paper called a drum. When an earthquake happens, the roll of paper shakes. The pen does not. A weight holds the pen still. The marks on the paper show the size of the earthquake. A small motor rolls the drum of paper. This lets the seismograph record what happens as time passes. Someone has to change the paper when it runs out.