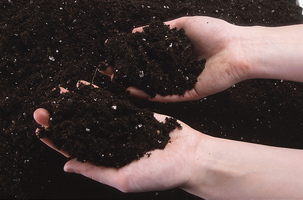 How Soil Is Made

Soil contains living and non-living things. Some of the inorganic things in soil are minerals, clay, silt, and sand. These things began as rocks. Plant roots can break rocks apart. Water, wind, and ice break rock into smaller bits. Ocean waves break down rocks into small pieces called sand. Minerals, like calcium and iron, were once part of rocks. Rain water dissolves them, and they become part of the soil. Healthy plants need minerals just like you do!

Things that are living, or once were living, are called organic. In soil there are bits of rotted leaves and grass. There may be tiny pieces of dead insects. Earthworms, bacteria, and other small living creatures eat this organic matter. They turn it into a rich substance called humus. Humus helps to stick crumbs of soil together. It helps the soil hold water, too, almost like a sponge.

When animals die and are not eaten by another animal, their bodies rot. Scavengers like millipedes and decomposers like fungi and bacteria help break down the remains and add nutrients to the soil. Although plants make their own food, they need nutrients and minerals to live and grow. Humus gives topsoil a dark color and helps plants grow well.