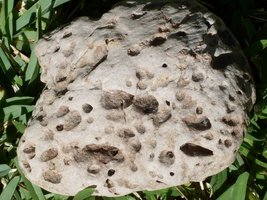 Rocks can be put into three main groups. They are grouped by how the rocks formed. Igneous (IG-knee-us) rocks form from magma that began deep inside the mantle of the Earth where it is very hot. "Igneous" comes from the Latin word "ignis," which means fire. Igneous rocks can form above ground or below it.

Igneous rocks start out as magma deep inside the Earth. Magma is a hot mixture of melted rock and gases. When magma erupts onto Earth's surface, it is called lava. The rocks that form when lava cools are called extrusive igneous rocks. (The prefix "ex-" means "out.")