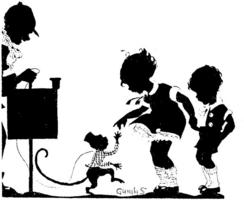 Most people realize that immigrants worked hard to establish themselves in their new country. But immigrants also had fun. Children had simple lives in the early 20th century. Boys and girls invented games with whatever they could find to play with their friends when they had time.

Most children played in the streets because parks were few and far between. Their apartments were crowded and small. Being outside gave the children a sense of freedom. One boy wrote later, "The streets were ours. Everyplace else-home, school, shop-belonged to the grown ups...the streets...gave us our first clear idea of what life in America was really going to be like."

The streets of those days were different than city streets today. Street vendors sold food and cold soda pop. The children followed them around even if they could not afford to buy anything. Horses pulled trolleys and wagons. Children liked to hitch rides on the backs of the trolleys. They also chased fire trucks. Some children were fortunate enough to go to summer camps sponsored by the Children's Aid Society and other agencies. Other lucky ones even went to amusement parks-a rare treat.