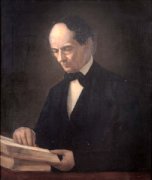 It's Time to Read

It's Time to Read

The person who created these books was a school teacher named William McGuffey. William Holmes McGuffey was born on September 23, 1800. His family believed that school was important. William went to a school to become a teacher. When he was 14, he taught at his first school. He also became a minister.

Later, William got married. He had five children. A book publishing company asked him to write a book. The book would help children learn to read. He wrote some of the stories. He included speeches and poems by other writers. William read things to the children in the town. If they liked them, he would put them in his books. He asked teachers to read the books aloud to students. He gave the teachers questions. The teachers asked students about what they read. He put children in groups by their age.