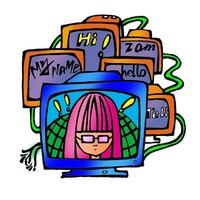 Jake really enjoyed computers. Jake played strategy games on the computer and had recently found a website where he could compete with people around the world. He used the Internet to do research for his homework. He also used instant messaging and to connect with a few friends. Jackie, for example, had an instant messenger too, and he could tell when she was online. They enjoyed typing messages back and forth to each other.

Jake was getting frustrated because his parents wouldn't let him have a computer in his room. He had to use the desktop in their large kitchen or their home office. Even if he used the family laptop, he had to be in a family room. The laptop was not allowed in the bedrooms.

"I don't know why we even have a wireless connection in our house," he typed to Jackie. "I could easily take the laptop into my bedroom, but my parents won't let me."

"Why don't you ask your parents about it?" Jackie typed back.

Just then, Jake's dad walked over to the desk.

"What are you doing?" he asked.

"I'm instant messaging with Jackie," Jake replied. Jake decided to ask his dad about the rules in the house.

"Dad, how come I can't have the laptop in my bedroom?"