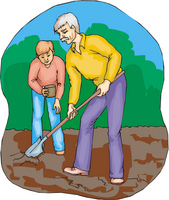 "What are you doing, Grandpa?" asked Jake.

"Can we help?" asked Jackie, who was again over at Jake's house to play. Jake shot her a look. He didn't want to work in a garden. He wanted to play catch. Normally, Jackie was a good sport and went along with whatever game Jake wanted to play.

"Sure, Jackie," Grandpa said. "There's an extra pair of gardening gloves over there on the bench."

Jackie skipped over to the bench while Jake rolled his eyes and sighed. He headed to the bench as well, though with a lot less enthusiasm.

After Jake and Jackie had their gloves on, Grandpa told them to get two hoes. These tools looked like mini square shovels, angled at the end of a wooden handle. Grandpa showed them how to use the hoes to loosen the soil and remove weeds.

Jake and Jackie hoed for quite a while. Jackie was whistling. Jake was huffing and puffing. Finally, they had three rows of loose soil.

"Great," Grandpa said. "Now we can plant." Grandpa brought out a tray of seedlings. "I have marigolds, tomatoes, and beans," he explained.

Grandpa told them they would plant the marigolds around the outside of the garden. "It is thought that marigolds deter pests and animals. They do give off a strange smell."

Grandpa then showed them how to gently take the seedlings out of their pots, loosen the roots, and after scooping out a hole, to place the plants into the hole, filling it in with the surrounding soil. Grandpa patted down the dirt around the roots.

Jake and Jackie planted the rest of the marigolds while Grandpa worked on the tomatoes and beans. Before long, the garden was really taking shape.

Grandpa stood up and slapped his hands together, loosening the remaining dirt on his gloves.

"Now then, kids, one more thing. These are fertilizer sticks. They will provide nutrients for the plants. Place them in the ground in between each plant, and then we'll water."