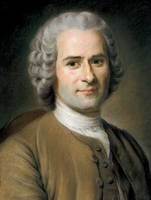 Maybe you have read about a young man who had a particular interest when he was growing up and later became a famous leader in the same field. Many famous musicians, scientists, architects, and artists got their start early in life. They found something they were interested in as children and stuck with it.

Rousseau became known as a famous thinker. He became famous for his ideas, which people learned about through his writings.

As a young child, Rousseau must have had plenty of time to think. His mother died just after he was born, and later his father abandoned him. After that, he often spent time alone in a garden reading and thinking. He was given classical literature to read at a very early age.