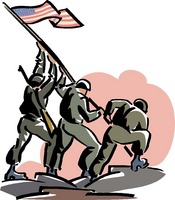 "Are you ready to start studying again?" Rob asked Jean.

"Yes, I'd like to finish up with U.S. history today," Jean replied. "I have to take the citizenship test very soon."

"Well, let's get busy. Today we are going to study history from the 1900s to the present. You might remember some of these things that have happened. Do you want to ask the questions, or should I?" Rob asked.

"Why don't you quiz me? That makes my brain work harder. I also like the explanations you give; they help me to understand," Jean said.

"Let's see, there were World War I, World War II, the Korean War, and the Vietnam War. I know those," Jean replied.

"Yes. There was only one major one you missed," Rob told him. "That was the Persian Gulf War."

"Oh, that's right. I forgot about that one; I guess because it was so short," Jean said.

"Who was president during World War I?" Rob asked.

"I believe it was Woodrow Wilson," Jean answered.

"Good job!" Rob praised. "Who was the president during World War II?"