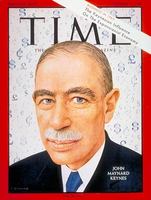 Do you like economics? If you are the sort who follows government policies closely, you ought to know this name - John Maynard Keynes.

John Maynard Keynes was born on June 5, 1883, in Cambridge, England. After graduating from Eton and King's College, the young man entered the civil service in 1906. His first post was with the India Office. But in less than two years, he was bored. Deciding that this was not the right career path for him, he resigned and moved back to Cambridge as a lecturer. During the First World War (1914-1918), he was summoned by the British government to work on overseas finance. In no time, his talent shone, and he rose quickly through the ranks. After the war, he was sent to France to attend the peace conference at Versailles. The general feeling at that time was to have Germany pay a huge sum of reparation, a view that John Maynard Keynes strongly disagreed with. He pointed out that a heavy financial burden would ruin the German economy. And a bankrupt Germany would only create more problems for everybody down the road. This prediction was later proven correct. But, sadly, nobody heeded his warning back then. Disappointed, he resigned and published a thin volume (The Economic Consequences of the Peace) to voice his concern. The book created quite a stir. It was the young economist's first brush with fame.

Now out of civil service again, John Maynard Keynes returned to Cambridge to resume teaching. He wrote and published many more books throughout his life. Among them, the most famous was The General Theory of Employment, Interest and Money (1936). He believed that the private sector would halt its investment during an economic downturn. Less investment would lead to fewer jobs. Fewer jobs would lead to lower consumption. And lower consumption would only make the private sector even more unwilling to invest. The only way to break out of this vicious cycle, John Maynard Keynes explained, was for governments to step up and increase spending on public works, even at the risk of running up a deficit. He said that more public works would lead to higher employment. Higher employment would lead to higher aggregate demand. And higher aggregate demand would eventually turn the economy around. This point of view was revolutionary! Given that the normal practice at the time was "a balanced budget," John Maynard Keynes had a hard time selling his idea. Eventually, one person decided to give it a try. That person was the U.S. President Franklin D. Roosevelt. To the amazement of everybody, the theory really worked! The U.S. economy rebounded, ending the Great Depression.