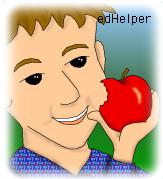 Have you ever heard of a man by the name of John Chapman? You probably have but may not realize it. His other name was Johnny Appleseed!

He was born on September 26, 1774, in Leominster, Massachusetts. His father, Nathaniel Chapman, was one of the Minutemen who fought at Concord in April 1775 when Johnny was only a baby. When the Continental Army was formed, Nathaniel Chapman joined to fight in the Revolutionary War.

Johnny's mother had three children: Elizabeth, John, and Nathaniel, Jr. His little brother died a few days after birth, and his mother died three weeks later from tuberculosis. Johnny was only about two years old at the time, and he probably didn't remember her at all when he got older.