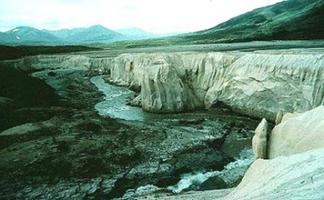 Katmai National Park and Preserve is in Alaska. It is on the northern part of the Alaska Peninsula. This is in southwestern Alaska. The park protects many things. It protects the Valley of Ten Thousand Smokes. Brown bears are also protected here. Visitors to this park will find many things to explore.

The park protects a group of volcanoes. They are known as the Katmai volcanic cluster. At least seven major eruptions have happened here since the last Ice Age. Many smaller eruptions have also happened. There are fifteen active volcanoes in the park. This is one of the world's most active places for volcanoes. It is part of the Pacific Ring of Fire.

The greatest volcanic eruption of the twentieth century happened at Katmai. In 1912, the Novarupta Volcano erupted. It lasted for almost four days. Ash traveled to Seattle, Washington. Ash was found as far away as Africa! The Valley of Ten Thousand Smokes was created by this eruption. It is forty square miles in size. The ash flow is between 100 and 700 feet deep.