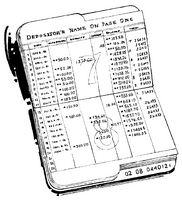 "Now comes the hard part," Kate told Josh. "You have to keep track of all your deposits and withdrawals. You always need to know how much money is in your account. You don't want to bounce a check. That will cost you money."

Josh was glad Kate was helping him with his new checking account. He thought he'd never have been able to figure all this out on his own.

Kate turned to the front of Josh's starter kit. There was a page that had words, columns, and gray and white lines on them. "This is your check register," she said. "This is where you keep track of all the activity on your account."

Josh just shook his head at all the lines, boxes, and words. "Oh, boy," he said, "this does look hard."

"You can do it once you get the hang of it. The hardest part is remembering to write down every transaction you make," Kate assured him.

"That means any time there is any activity on your account. Transactions include deposits, interest paid, checks you write, and any other withdrawals. This includes anything you do with your debit card or at an ATM," Kate said. "Let's get started with the transactions you've already done."

Josh said, "So far I've made two deposits and written one check."

She pointed to the first gray line on the check register. She told Josh to write the date of his first deposit in the box on the far left. Then Kate said to write "deposit" in the long box next to it. She pointed to the white line underneath. "This is where you can write an explanation about whatever you wrote on the gray line," she said. "For example, since this was cash, you could write 'cash' on the white line."

Kate told Josh that was where he would write the balance. Since this was the amount he started his account with, she told him to just write 50.00 in the last box. Then they did the same thing for Josh's second deposit. This was a check for $25. Josh wrote the date. In the second box, Josh wrote "deposit." On the white line underneath, he wrote "birthday check."