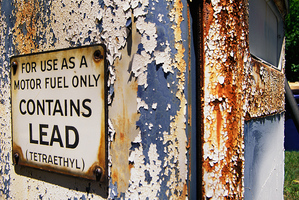 Leaded Gasoline Becomes a Thing of the Past

Lead - at one time it was added to gasoline to make car engines run more smoothly. It raised the octane levels of the gasoline and made car engines purr - with none of those annoying engine knock sounds.

Lead is also a poison. Maybe you have heard of lead paint and the hazards it poses for young children. Lead in gasoline was also hazardous. It polluted the air and led to serious health problems. Breathing air polluted by leaded gasoline has been linked to many specific medical conditions including brain and nerve damage, mental retardation, and behavior problems. The consequences of breathing air polluted by leaded gasoline are especially hazardous to children.