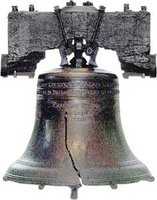 Is a broken bell good for anything? It is if it is the Liberty Bell. The Liberty Bell is an important symbol in America. It stands for freedom. The bell was made in 1751. Leaders in the Pennsylvania Colony needed a way to announce special meetings. They ordered the bell from Great Britain. The bell was sent to Philadelphia. When it arrived, several leaders tested it. It was cracked! Two founders, or metal workers, melted the bell and made a new one. This one was not broken. The leaders, however, did not like the sound that it made. So the men melted the bell once again and made a third bell. This one was a keeper! It was called the State House Bell.

The bell has a special message written on it. It says "Proclaim Liberty throughout all the land unto all the inhabitants thereof." This means that all people who live in America should be free. In the 1830s many Americans felt that slavery was wrong. They wanted all people to be free, just like the bell said. These people began using the bell as their symbol. They began printing fliers that told people why slavery was wrong. They put pictures of the State House Bell on their fliers. They believed that the bell symbolized everything that they believed in. One flier contained a poem. The poem was called "The Liberty Bell." Not long after that flier was printed, the State House Bell became known as the Liberty Bell.