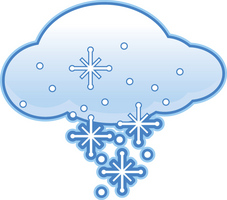 Snow is a sign of cold weather. Most snowstorms happen in winter. Some states get lots of snow. Other states hardly ever see a snowflake. Every state has had some snow at one time or another. It even snows atop the volcanoes on two of the islands of Hawaii.

A snowfall makes everything white. Snow reflects the sunlight. The heat it absorbs from sunlight starts melting the snow. It also reflects moonlight. That is why everything seems brighter at night after it snows.