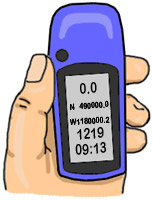 Reading Comprehension for May 3

"I wonder what they are doing," Sara wondered aloud as she and her adopted brother Anton arrived in the parking lot of the local grocery store. She watched a group of people look around the bushes at the edge of the lot. They lifted up branches and poked around under the bushes. One of them was holding some type of device.

Anton spoke up. "I bet those people are geocaching (JEE-oh-kash-ing)."

"Geocaching is a hobby where people use clues and a Global Positioning System (GPS) receiver to locate small treasures. I've heard there are treasures in over 200 countries, and many thousands of treasures to be found! I read about it on the Internet."

"What's in the treasure box?"

"Depending on the size, the treasure box may contain only a log for people to sign, or it may have several items available for trade. People usually find small toys, pens, or other trinkets but sometimes find gift cards, money, jewelry, or other nice items. Sometimes the treasure, which is actually called a cache, will have a theme, like books or music."

Sara watched as one of the people tried to pull out a small box from under a bush. She noticed that he tried to do it without anyone seeing him.

"Why are they being so sneaky?" Sara asked.

"First, I think they don't want to give away the location to others who may want to search. Second, they probably don't want any muggles to take the treasure."