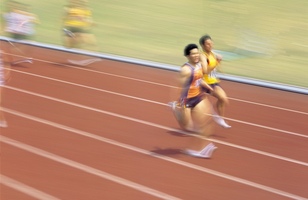 Making a Sport of Running and Throwing

It is probably a fairly safe assumption to say that humans start running shortly after they learn to walk. It didn't take early man long to discover that if he wanted to get somewhere more quickly than he could walking, he ran. Perhaps he was fleeing from danger. Perhaps he was late for dinner. There are many reasons why humans run.

In 776 B.C., ancient Greeks held the first Olympic Games. These contests were held to honor the gods that they believed in. These gods were said to live on Mount Olympus. The games were held at Olympia. Are you seeing how the name Olympic Games got started? During the first Olympic Games, a foot race was held. The distance for the race was 600 feet. The race was won by a cook named Koroibos. According to history, this was the only athletic contest held at this Olympic festival. Other events were more for the mind than the body.

Some archeologists suggest that the first Olympics were held even earlier than 776 B.C. They believe that they have found the remains of prizes awarded to contestants in 900 B.C.