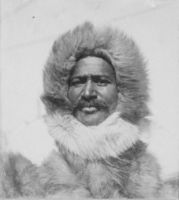 What do you do when you are having a hard time about something? Do you feel sorry for yourself, or do you use the experience to make you stronger? Matthew Henson didn't mope or pout. He used the inner strength that he gained from hard times to conquer the North Pole.

Matthew Henson faced his first heartache when he lost his mother at a young age. He was born on August 8, 1866, in Baltimore, and soon Matthew was being raised by his father. His father had lots of challenges as a single parent. These difficulties were compounded because his family was African American. The Ku Klux Klan persecuted African Americans, so the Hensons moved to Washington, D.C. They lived with Matthew's uncle, who was not kind to the young boy. When Matthew's father died, Matthew was left in the care of his uncle. The situation became so unbearable that Matthew ran away.

Young Matthew had lost both of his parents and his only home. He lived on the streets. He didn't go to school. He looked bedraggled, and he was hungry. Many children would have turned to crime, but not Matthew. Matthew saw a want ad in a restaurant and got a job sweeping floors and washing dishes. You might not like chores like that, but for Matthew, it was a way out of poverty.

Matthew worked hard. The restaurant owner noticed his efforts and soon let him sleep on the floor of the restaurant at night. Things were looking up because now Matthew had a job and a place to stay. His life changed again when he saw an ad from a ship captain looking for young men to go to sea. Thirteen-year-old Matthew thought this was his chance to have a real adventure.