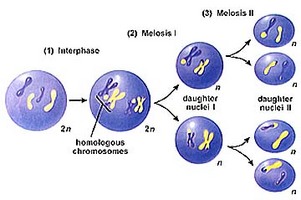 Living things reproduce to make more organisms like themselves. When organisms reproduce, many traits of the parents are passed to the new organism. Reproduction is necessary for the survival of the species. If organisms didn't reproduce, the species would die out.

Special cells, sperm and egg cells, are used in sexual reproduction. These cells, called gametes, form by a type of cell division called meiosis. Cells formed through meiosis have only half the number of chromosomes or genetic material of the parent cell. For example, most cells of fruit flies have eight chromosomes, arranged as four similar pairs. But the egg or sperm cells of a fruit fly have only four chromosomes. Humans have forty-six chromosomes, arranged in twenty-three pairs. But human egg and sperm cells only have twenty-three chromosomes. How does this happen?