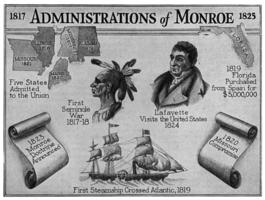 In 1815, four countries in Europe joined together. They made an alliance. They planned to stop any fighting that started near their countries. They also talked about helping Spain. They would even help Spain get some of the colonies back. Many of these colonies had already won their freedom.

Britain was also worried. It worried about the trading that they did with other countries. Britain was sure their trade would be hurt if Spain took over its colonies again. They thought the United States should join them. They would help the colonies in Latin America.

James Monroe was president at the time. He did not join with Britain. He made a bold move in 1823. He made a statement about how the United States would treat the colonies. This was called the Monroe Doctrine.