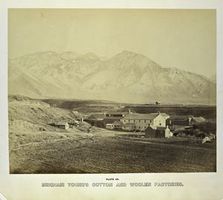 Mormons belong to the Church of Jesus Christ of Latter-Day Saints. This large group of people would move onto land in the West. This land became part of the United States after the Mexican-American War.

Joseph Smith started the church in the 1830s. Smith was a farmer in New York. Many people joined him in his faith. He was an energetic man. He was also popular.

Many people did not like what he said. Mormons believed that everyone together, not one person, should own property. Smith also said that a man could have more than one wife. Neighbors became very angry with Smith and the Mormons. They forced them to leave New York.