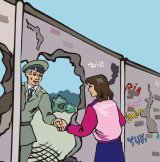 Imagine waking up one morning to see a huge concrete wall outside your bedroom window. This four-meter-high gray wall runs down your street and all the way across your city or town. You pick up the phone to call your friend across the street who is now on the other side of the wall. A telephone operator says you aren't allowed to call him anymore. You go outside and walk down the street to an opening in the wall. An armed guard says you can't go through. Many of your friends and family are across the wall. How would this make you feel?

As strange as that sounds, this actually happened in the German capital city of Berlin. And the infamous Berlin Wall stood for almost 40 years, separating families and friends who lived in the same city.

The Allied Forces - the United States, the Soviet Union, and Britain - defeated Nazi Germany at the end of World War II in 1945. The Allies decided to divide Germany among themselves. Each nation of the Allies, and France, would get to control part of Germany. The United States, Britain, and France controlled "occupation zones" in the west, while the Soviet Union controlled East Germany.