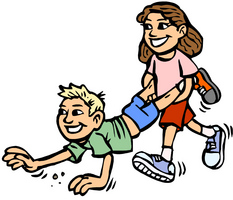 Several parents stood by cheering them on. One or two of the "wheelbarrows" collapsed for a moment before getting up and carrying on.

At the end of the race, many flopped on the ground to catch their breath. The race looked easy, but it wasn't.

"The winners of the wheelbarrow race were Jess and Dan Turner; second place went to Abby Gresham and Livie Barton, and third place winners were James and Zach Barton," said Mr. Porter.

The children stood in a row while ribbons with small medallions were put around their necks. Mr. Brazeal snapped pictures of them with his digital camera.

As soon as they could, the three young Bartons ran to their parents to show off their prizes.

"Well done, kids," said Dad. "Do you want us to hold those for you? Your next race is coming up. What is it again?"

"It's the egg and spoon race," said Mom. "We'd better get over to the starting line."

None of the Bartons won the egg and spoon race, but that did not discourage them. Everyone who tried was given a ticket. The tickets could be used to win prizes like hats or small toys.