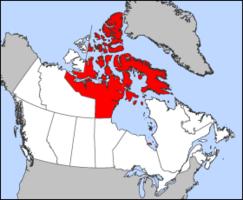 The first people to live in Canada's Arctic region were the Tuniit or Dorset people. It is thought that they arrived on the continent from Russia via a land bridge about four to five thousand years ago.

Then a new people, the Thule, arrived about 1,000 years ago. For about 500 years they hunted whales. Then the climate cooled. Ice covered the ocean for much of the year, making it impossible to use boats. Instead of hunting whales, the people broke into smaller groups and hunted caribou and seals. These groups evolved into the modern Inuit that are known today.

Soon after, European explorers invaded the land, and traders quickly followed. The Hudson's Bay Company had the largest effect on the Inuit. The Inuit found that by providing furs, they could do more than just survive. They could get tools they'd never had before, as well as new kinds of foods.