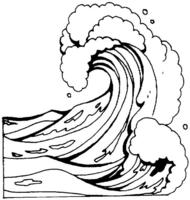 Ocean Water on the Move

Look at the globe in your classroom. Notice how much of the globe is blue. The blue represents water. Almost ľ of the Earth, about 71%, is covered with water. There are streams, rivers, ponds, lakes, and oceans.

The big blue areas you see on the globe are oceans. An ocean is a large body of salt water. Sometimes oceans are called seas. Seas are usually considered to be smaller bodies of water than oceans.

There are five oceans of the world. They are the Arctic, the Atlantic, the Indian, the Pacific, and the Southern (or Antarctic) oceans. The Pacific Ocean is the largest. All the oceans include smaller bodies of water around their edges, such as seas, gulfs, and bays.

When you look at the globe more closely, you see that all the oceans of the world touch each other. Really, we could say there is only one ocean - the "world ocean." But long ago, people named the ocean nearest to them. Different parts of the world's ocean waters were given different names.