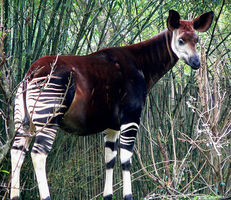 The okapi and giraffe have similar tongues. The okapi's tongue is usually about twelve inches long. Its tongue is prehensile, which means that it can grab things. The okapi uses its tongue to strip leaves and buds from trees. The okapi can lick its eyes and its ears with its tongue! The okapi has large ears. Its ears are very sensitive to sounds. This helps the okapi to know when predators are approaching. Okapis make a tasty lunch for leopards.