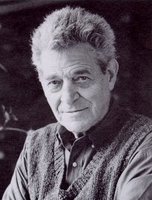 By the time he toddled, Shrek could spit flame a full ninety-nine yards and vent smoke from either ear. With just a look he cowed the reptiles in the swamp. Any snake dumb enough to bite him instantly got convulsions and died. ~William Steig

Does this sound familiar? It is the beginning of a book by William Steig. The book is called Shrek. Not many people know that Shrek was a book before it was a movie. If viewers watch closely, William Steig is honored at the end of Shrek 2. In the credits it says, "In memory of William Steig."

William Steig was born on November 14, 1907. He was born in New York City. When he was young, he liked to read. He also liked to paint. His parents encouraged him to be an artist. William graduated from high school. He went on to college. He spent time at three different colleges. He never graduated from any of them.