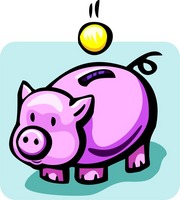 Pam was excited. Her mom was taking her to the bank to open a savings account. Pam had been putting the money she had gotten as gifts, as well as spare change, into her money bank at home. One day she decided to count the money she had saved. There was $68.98 in there!

Pam's mom said a savings account was a good idea. Pam could put her gift money in the bank and make it grow. Pam wasn't sure how that worked. But her mom explained that the bank would pay her interest for keeping her money there. They would just add that money to her account. Pam thought that was a great idea.

Pam's mom also said a savings account was a safer place to keep her money. Someone could easily steal the cash from her money bank if they broke into the house. She also told Pam that having her money in a bank account would keep it safe from her. Pam had often taken out small amounts to buy candy or soda. With her money in the bank, Pam wouldn't be able to get to it as easily. She wouldn't spend it on little things that she didn't really need. That way she could save for bigger things, maybe even college!