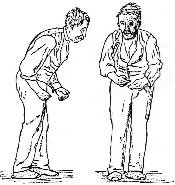 Tara's grandfather walked with a shuffle. His hands shook frequently. He spoke very slowly. He took special medicine to help these symptoms. He said he had the same disease as Michael J. Fox and Muhammad Ali. What disease is that? It is Parkinson's disease.

Parkinson's disease is a disease of the central nervous system. The central nervous system is the brain and spinal cord. It essentially controls all you do. Deep in the brain, there's a collection of nerve cells called basal ganglia. They help control movement. They make dopamine, a chemical that is needed to send messages to coordinate the movements of your body. People with Parkinson's disease have damaged nerve cells. As a result, dopamine levels are low. This results in muscle function loss.

Gradually, someone with Parkinson's disease loses the ability to control movement completely. What causes Parkinson's disease? No one knows for sure. The symptoms are caused by low levels of dopamine. However, no one knows why the nerve cells were damaged in the first place. There are ideas, but no definite conclusions. Some believe it is connected to a certain gene. Others think it must be something in the environment.