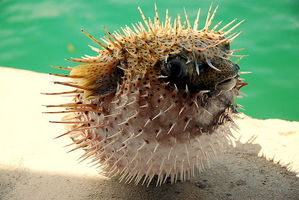 Pufferfish fit their name very well. They are able to puff themselves up to twice their size. They do this by filling their stomachs with water. They blow themselves up like balloons. Pufferfish are also called blowfish, swellfish, or balloonfish.

Most pufferfish live in tropical and subtropical waters. They can be found in the Pacific, Atlantic, and Indian Oceans. The normal body of a pufferfish looks like a tube. A dwarf pufferfish may be only one inch long. A giant pufferfish can be more than two feet long. When the pufferfish fills with water, its body looks like a ball.

Pufferfish don't swim very fast. They are also rather clumsy. Making themselves look bigger helps them to scare away predators. Some pufferfish have spines on their skin. The spines also make the pufferfish not very tempting to predators.