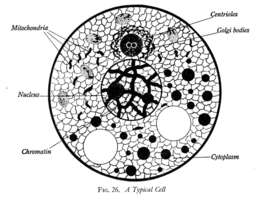 Did you know there are two kinds of respiration? One kind of respiration is when we breathe air in and out of our lungs. The other kind happens in both plant and animal cells, including people's cells.

Animals and plants need oxygen. When an animal breathes, it takes in oxygen gas and releases carbon dioxide gas into the atmosphere. This carbon dioxide is a waste product produced by the animal's cells during cellular respiration.

Cellular respiration occurs in the individual cells. Digested foods have chemical energy stored in them. Energy to live comes from releasing this energy. Cells use oxygen to "burn" food for energy. Water and carbon dioxide are produced as wastes. The cells in both plants and animals perform respiration. Carbon dioxide is also released into the atmosphere when fuels are burned, such as in automobiles or factories. Plants take in carbon dioxide and release oxygen through their leaves.