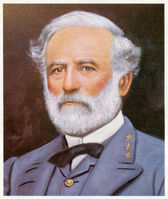 Lee was born in Virginia in 1807. His father had fought in the Revolutionary War. Lee was well educated. He entered West Point in 1825. Four years later he graduated. He was second in his class. Lee served in the Mexican-American War. He was recognized for his bravery during the war. This military experience would help him when the Civil War broke out.

Many Southern generals were torn when the war broke out. Should they stay and fight with the Union army against their home states? Or should they join the Confederate army and fight against the country they had promised to serve? Abraham Lincoln asked Lee to lead the Union armies. Lee refused his offer. He loved the country and was against Virginia seceding. But when Virginia did secede, Lee felt that he had no choice but to fight with it.